Interested in discussing cutting edge research ideas with both peers and leaders in their field?

Interested in broadening your professional network across the mathematical sciences?

Interested in the opportunity to present your ideas and hear about funding opportunities from program officers?

The Idea-Lab invites 20 early career researchers (postdoctoral candidates and assistant professors) to ICERM for a week during the summer. The program will start with brief participant presentations on their research interests in order to build a common understanding of the breadth and depth of expertise. Throughout the week, organizers or visiting researchers will give comprehensive overviews of their research topics. Organizers will create smaller teams of participants who will discuss, in depth, these research questions, obstacles, and possible solutions. At the end of the week, the teams will prepare presentations on the problems at hand and ideas for solutions. These will be shared with a broad audience including invited program officers from funding agencies.

IdeaLab applicants should be at an early stage of their post-PhD career. "I thought the program went very well. It was fun and interesting to try and work on a problem that was significantly outside my field with talented people who were also outside my field. I also thought the people in charge of our group did a very good job in fostering a fun atmosphere that encouraged us to try random attacks on a hard problem without worrying about that fact that any particular one would almost certainly fail (but hopefully might provide some insight eventually)."
-- IdeaLab Participant

The climate is changing and it is due to anthropogenic sources of carbon-that is agreed upon by the scientific community. But is there a possibility of abrupt change? On the whole, the large climate models do not predict such occurrences, but they also do not include the physical mechanisms that might trigger these tipping points in the modeling. So, how do we try to predict abrupt transitions? Is it even feasible?

There has been a considerable amount of mathematics devoted to rapid changes, dating back to catastrophe theory, and also to systems that enjoy varying time-scales. This has laid the groundwork for an emerging area of tipping points in climate. But can we account for the potential climate tipping points with what amount to low-dimensional bifurcations? And, if we can, what are ways that this mathematical technology can be factored into the construction of large models?

There have, of course, been abrupt changes in the past, such as rapid warming after ice-ages. Can we learn from these? The technical approach here might be to assimilate the data into models. But the current techniques of data assimilation do not accommodate abrupt transitions. This can be viewed as the same issue arising in modeling: both modeling and data assimilation require relatively smooth evolution. But we must still be able to say something when it is not so smooth. 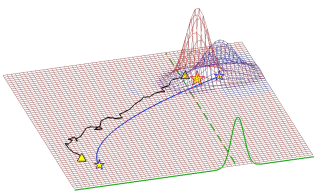 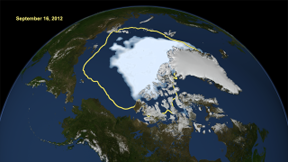 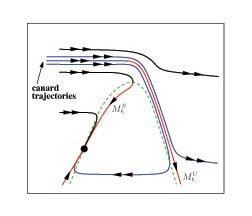 Photo credit (above and right): Sebastian Wieczorek-University of Exeter

An encryption scheme is a method for efficiently computing an encrypted form e(x) of a given input x. It should be invertible, but computing the inverse must require a secret key. Roughly speaking, for the scheme to be secure it should be hard to learn anything useful about a series of inputs x1, x2, ... xn, given just the corresponding series of outputs e(x1), e(x2), ... e(xn). For over 30 years it was an open problem to find a secure encryption function e that was also a ring homomorphism, that is, that satisfied e(x + y) = e(x) + e(y) and e(xy) = e(x) e(y). To mention only one of the potential applications for such an encryption scheme, imagine calculations performed in the cloud on vast quantities of health data encrypted for privacy.

The first glimpse of a solution to this problem was given by a breakthrough discovery by Craig Gentry in 2009. The scheme he proposed was theoretically sound, given some plausible conjectures, but it was far too inefficient to be practical. There has been a great deal of work done on this since then, by many researchers, and today's schemes are orders of magnitudes more efficient in both time and meory than the original. Yet they are still far from practical, and new ideas are needed.

The object of this idea lab will be to gather together mathematicians from different backgrounds, without necessarily any prior experience with cryptography, to explore new approaches to this problem, both theoretical and computational.