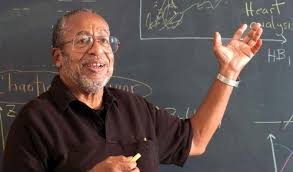 May 2, 2018 - The National Blackwell-Tapia Committee is pleased to announce that the 2018 Blackwell-Tapia Prize will be awarded to Dr. Ronald E. Mickens, the Distinguished Fuller E. Callaway Professor in the Department of Physics at Clark Atlanta University.

The prize is awarded every other year in honor of the legacy of David H. Blackwell and Richard A. Tapia, two distinguished mathematical scientists who have inspired generations of African American, Latino/Latina, and Native American students and professionals in the mathematical sciences. The prize recognizes a mathematician who has contributed significantly to research in his or her field of expertise, and who has served as a role model for mathematical scientists and students from under-represented minority groups or has contributed in other significant ways to addressing the problem of the under-representation of minorities in math.

Mickens' mathematical reach extends across multiple disciplines and has a significant global impact. He is well-known for his contributions in multiple areas of applied mathematics generally related to the solution of differential equations, in particular, the areas of nonstandard finite differences (NSFD) and nonlinear oscillations. In fact, he created the field of NSFD which seeks to discretize dynamical systems while retaining properties of the system. Many researchers around the world have extended Mickens' pioneering work on NSFDs to a plethora of systems.

Mickens' Ph.D. is in Theoretical Physics from Vanderbilt University (1968) and much of his work was grounded in mathematics. Since then, he has made significant and lasting contributions to the mathematical sciences. He has been at Clark Atlanta University, a Historically Black College and University (HBCU) in Atlanta, Georgia, where he has taught, mentored and researched since 1990. Before that, Mickens taught Physics at Fisk University (1970-1982) and Atlanta University (1982-1990).

Mickens' interest and engagement in issues around the underrepresentation of people of African American and Latinx descent in mathematics is sustained, significant and substantial. He has been unearthing, celebrating and publicizing the achievements of Black scientists for more than four decades. For example, he was elected a charter Fellow of the National Society of Black Physicists in 1992 and received the Edward Bouchet award for Excellence in Research from the National Conference of Black Physics Students in 2004. His book Edward Bouchet: The First African American Doctorate was published in 2002 and is an important contribution to the history of the participation of African Americans in STEM fields.

As a recipient of a Ford Foundation Postdoctoral Fellowship for Minorities himself (1980), Mickens has been active in mentoring Ford Fellows, regardless of discipline. These mentees are African American and Latinx individuals who are at the beginning of their academic careers, have been awarded a prestigious fellowship, and are expected to make meaningful societal contributions. During his long tenure as a professor at an HBCU, Mickens has had an immeasurable impact on a large number of students, the vast majority of whom have been African American. In addition to serving as a role model to the students who have passed through his classes, Mickens has been an accessible resource and mentor to numerous early career and mid-career mathematical scientists from various underrepresented groups.

The prize will be presented at the Tenth Blackwell-Tapia Conference and Award Ceremony on Nov. 9-10, 2018, at the Institute for Computational and Experimental Research in Mathematics (ICERM) at Brown University in Providence, RI. The conference includes scientific talks, poster presentations, panel discussions and ample opportunities for discussion and interaction. Participants will come from all career stages and will represent institutions of all sizes across the country, including Puerto Rico. It is supported by the National Science Foundation (NSF) through the Mathematical Sciences Institutes Diversity Initiative, the Alfred P. Sloan Foundation, Brown University, and Cornell University.