The densest packing of unit disks in the plane is easily seen to be highly symmetric. This is exploited in statistical mechanics in arguing that as the density parameter is decreased from its optimum most packings at fixed density remain quite orderly ('solid'), changing only gradually until at a specific density they suddenly begin to 'melt' into the disordered ('fluid') packings of low density. This workshop will explore two variants of this fundamental phenomenon. One variant concerns packings of special shapes, such as the Penrose kites and darts of the accompanying figure, whose densest packings are aperiodic tilings. The other concerns complex networks for which the optima are certain extremal graphs. These optimization problems, and especially their associated solid phases and solid/fluid phase transitions, are the subject of the workshop.

In summary, our workshop will explore two optimization problems on which there is active mathematical research. It will then focus on their associated solid phases and solid/fluid phase transitions which, on the contrary, are in dire need of mathematical clarification/understanding. It is hoped that progress can be made by pooling the expertise of researchers interested in various versions of this phenomenon. To promote cross-disciplinary information flow between the participants, the workshop format will have long tutorial/discussion sessions in the mornings, and short, more specialized talks in the afternoons.

The following tutorial/discussion sessions have been arranged so far: Emergent phenomena are properties of a system of many components which are only evident or even meaningful for the collection as a whole. A typical example is a system of many molecules, whose bulk properties may change from those of a fluid to those of a solid in response to changes in temperature or pressure. The basic mathematical tool for understanding emergent phenomena is the variational principle, most often employed via entropy maximization. The difficulty of analyzing emergent phenomena, however, makes empirical work essential; computations generate conjectures and their results are often our best judge of the truth.

The semester will include three workshops that will concentrate on different aspects of current interest, including unusual settings such as complex networks and quasicrystals, the onset of emergence as small systems grow, and the emergence of structure and shape as limits in probabilistic models. The workshops will (necessarily) bring in researchers in... (more) 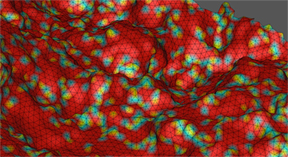 This workshop will explore emergent phenomena in the context of small clusters, supramolecular self-assembly and the shape of self-assembled structures such as polymer vesicles. The emphasis will be on surprises which arise when common conditions are not satisfied, for instance when the number of components is small, or they are highly non-spherical, or there are several types of components. Interactions vary from hard sphere repulsion to competition between coarse-grained liquid-crystalline ordering competing with shape deformation.

Examples of this behavior are common in materials such as bulk homopolymers (rubber), copolymers, liquid crystals and colloidal aggregates. A basic mathematical setting would be to consider small clusters of hard spheres with isotropic short-range attractions and study the shape of the clusters as a function of the number of components. One known surprise is that highly symmetric structures are suppressed by rotational entropy.

This emphasizes the need... (more) 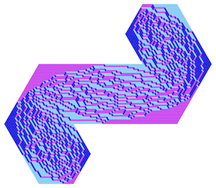 Since the days of Boltzmann, it has been well accepted that natural phenomena, when described using tools of statistical mechanics, are governed by various "laws of large numbers." For practitioners of the field this usually means that certain empirical means converge to constants when the limit of a large system is taken. However, evidence has been amassed that such laws apply also to geometric features of these systems and, in particular, to many naturally-defined shapes. Earlier examples where such convergence could be proved include certain interacting particle systems, invasion percolation models and spin systems in equilibrium statistical mechanics.

Crystallization of hard shapes- from disks to tetrahedra

The Phases of Hard Sphere Systems

How the Ising crystal grows