VIRTUAL ONLY: Competitive Equilibrium with Gross Substitutes, with Applications to Problems in Matching, Pricing, and Market Design

VIRTUAL ONLY: Competitive Equilibrium with Gross Substitutes, with Applications to Problems in Matching, Pricing, and Market Design (May 11 - 12, 2020)
This workshop will be offered virtually. The in-person meeting has been cancelled due to the COVID-19 outbreak. A schedule for virtual talks will be posted soon. Accepted participants will be notified how to access the virtual presentations. All other interested parties can view the talks via live-stream.

A short history of equilibrium computation. The computation of economic equilibrium is making a spectacular comeback in economics, mathematics and computer science. The availability of massive real-time datasets and the affordability of computing power, including parallel computation, has made it possible to implement and build on an effort that had been stalled since the end of the 1970s. But even more than the new technical possibilities, it is the novel applications to online platforms and market design tools that led to the surge of interest in computation. Pricing engines like Uber’s, matchmakers like OkCupid, allocation mechanisms like those that are used by public school districts – all need to compute an equilibrium problem.

While the problem of equilibrium computation is hard in general, a particular instance of the problem, namely the gross substitutes property, makes it analytically tractable and computable in practice, while able to cover a large number of applications including optimal transport, multinomial choice models, matching, hedonic models, and trade equilibrium problems. The goal of this workshop is to bring together researchers working on the frontier of the current knowledge in this topic, consolidate the theory, present state-of-the-art applications, and present the latest algorithms. It will connect several different mathematical fields:

It will also include an important algorithmic component and thus touch upon computer science and operations research.

A number of introductory lectures will set the stage before moving on to the presentation of research papers. 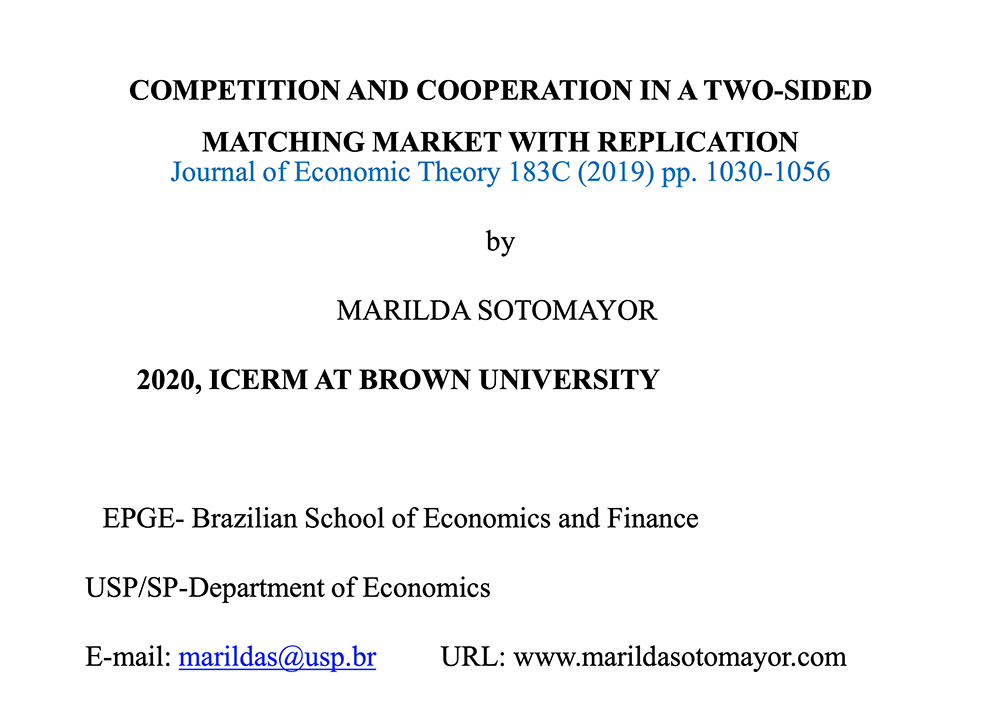 Competition and Cooperation in a Two-Sided Matching Market with Replication

Information Acquisition in Matching Markets - The Role of Price Discovery

On the Construction of Substitutes

Near Substitutes and Equilibria with Indivisibilities