Explicit Methods for Modularity of K3 Surfaces and Other Higher Weight Motives (Oct 19 - 24, 2015)

Only recently has it become feasible to do large scale verification of the predictions of the Langlands program in higher rank cases and to present the results in a way that is accessible widely to mathematicians. Moving from the understanding of Galois representations attached to elliptic curves to those attached to surfaces and other higher-dimensional varieties poses interesting problems in both arithmetic, algebra, geometry, and analysis.

In this workshop, we will consider computational and other explicit aspects of modular forms in higher rank. Topics covered will include: K3 surfaces and their connections to modular forms on orthogonal groups, algebraic modular forms associated to classical groups and their computation, and motives arising from general Calabi-Yau varieties accessible to explicit methods, including hypergeometric motives.

This workshop will bring together researchers who approach the Langlands program from a number of different perspectives, and our goal is to work in developing both the theoretical and computational aspects in tandem. Computational Aspects of the Langlands Program 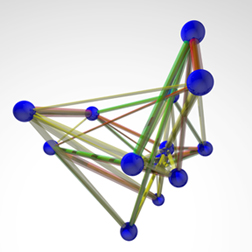 In the late 1960s, Robert Langlands discovered a unifying principle in number theory providing a vast generalization of class field theory to include nonabelian extensions of number fields. This principle gives rise to a web of conjectures called the Langlands program which continues to guide research in number theory to the present day. For example, an important first instance of the Langlands program is the modularity theorem for elliptic curves over the rational numbers, an essential ingredient in the proof of Fermat's last theorem.

Despite its many successes, the Langlands program remains vague in many of its predictions, due in part to an absence of data to guide a precise formulation away from a few special cases. In this thematic program, we will experiment with and articulate refined conjectures relating arithmetic-geometric objects to automorphic forms, improve the computational infrastructure underpinning the Langlands program, and assemble additional supporting... (more)

One of the crowning achievements of number theory in the 20th century is the construction of the modularity correspondence between elliptic curves with rational coefficients and modular forms of weight 2. The consequences of this result resound throughout number theory; for instance, it enables the resolution of certain problems of diophantine equations (e.g., Fermat's last theorem) as well as the systematic tabulation of elliptic curves, which in turn provides the basis for many new conjectures and results.

The aim of this workshop is to lay the groundwork for extending this correspondence to curves of small genus over number fields. The general framework for this correspondence is predicted by the Langlands program, but much remains to be made explicit. We will explore theoretical, algorithmic, computational, and experimental questions on both sides of the correspondence, with an eye towards tabulation of numerical data and formulation of precise conjectures.

This conference will revolve around several themes: the computational complexity of L-functions; statistical problems concerning L-functions, such as the distribution of their values, and zeros, moments of L-functions, statistics and size of ranks in families of elliptic curves; practical implementations of algorithms and their applications to testing various conjectures about L-functions; rigorous and certifiable computations of L-functions. One goal is to stimulate dialogue between theoreticians and computationally minded researchers regarding problems to which computation might provide insight or important confirmation of conjectures. In the other direction, we hope that discussions will lead to new ideas concerning algorithms for L-functions.

One parameter families of Calabi--Yau threefolds with trivial monodromy

Elementary evaluations of some K3 point-counts and periods