This workshop will bring together researchers interested in a panoply of unusual configuration spaces, arising in applied fields or in plausible models, to look for similarities or creative tensions between them.

Along with the mathematical aspects, computational experimentation aspects will be highlighted, as well as applications ranging from path planning algorithms for robots, reconfiguration strategies for origami and protein folding. 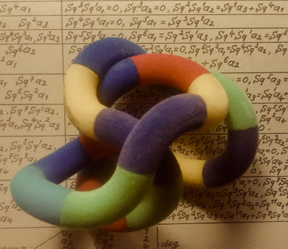 This thematic semester aims at exploring those areas of topology where the research challenges stem from scientific and engineering problem and computer experiments rather than the intrinsic development of the topology proper. In this context, topology is a toolbox of mathematical results and constructions which impacts and inspires developments in other areas. Born as a supporting discipline, aimed at creating a foundation of intuitive notions immensely useful in differential equations and complex analysis, algebraic topology remains indispensable in many disciplines.

Our goal here is to concentrate on relatively recent areas of research enabled, in particular, by the computational revolution in mathematical discovery.

The past decade has seen a surge of interest in applied topology, a vaguely defined area that became a focus of attraction for several communities neighboring mathematics proper - biology, engineering, computer science, data analysis, to name a few. The central lure... (more)

This workshop will explore topological properties of random and quasi-random phenomena in physical systems, stochastic simulations/processes, as well as optimization algorithms. Practitioners in these fields have written a great deal of simulation code to help understand the configurations and scaling limits of both the physically observed and computational phenomena. However, mathematically rigorous theories to support the simulation results and to explain their limiting behavior are still in their infancy.

Randomness is inherent to models of the physical, biological, and social world. Random topology models are important in a variety of complicated models including quantum gravity and black holes, filaments of dark matter in astronomy, spatial statistics, and morphological models of shapes, as well as models appearing in social media. The probabilistic method, theory of point processes, and ideas from stochastic and integral geometry have been central tools for proofs and efficient... (more)

Topology and Geometry in a Discrete Setting

While the semester program as a whole is inspired by the original view of topology as analysis situs fueled by applications in natural sciences and engineering, this workshop emphasizes the impact of topology and geometry on discrete structures.

Combinatorially inspired configuration spaces, such as arrangements of points, lines, hyperplanes, polytopes, and the like, provide intricate material and ongoing challenge for topological and geometric techniques. The latter have often gone through a process of adjustment towards their discrete, stratified objects, as in the case of discrete Morse theory or application of Fourier analysis. Notably, the recent solution of the log-concavity conjecture for matroids by Adiprasito, Huh and Katz was achieved by developing Hodge theory for combinatorial geometries which opens up most exciting perspectives on further applications. The construction of higher dimensional expanders is yet another promising direction. Inspired by the rich theory of graph... (more)

Symplectic invariants of the moduli space of polygons in R^3

Shape it as you wish- a minimal shapeable sheet

Equilateral Equiangular Polygons in the Plane

Spaces of triangulations of a square

The toric geometry of triangulated polygons in Euclidean space